The Wilmette Harbor Club, located north of Chicago on Lake Michigan, includes a clubhouse with both indoor and outdoor dining, a gas dock, and mooring for several hundred boats. Since 1929 the Wilmette harbor's Sheridan Shore Yacht Club has hosted sailboat fleet racing during the summer months. Wilmette harbor is also home to the Sheridan Shore Sailing School for both adults and children. 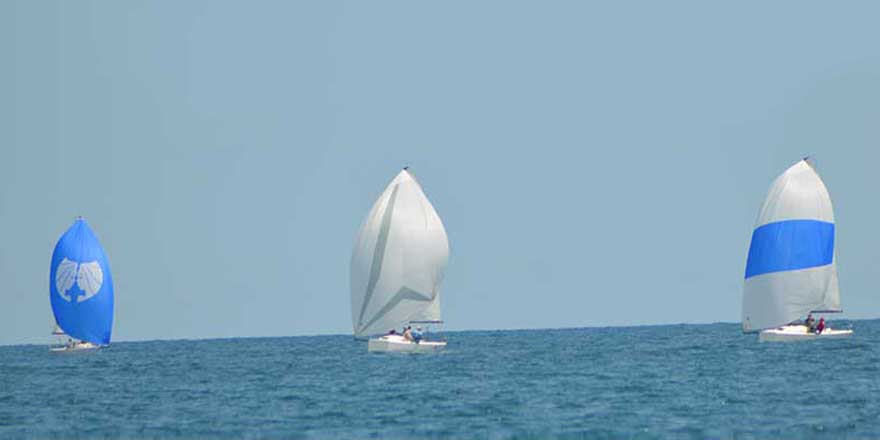 ‘Twas the night before Race Weekend and all through the fleet
Every captain was working to make their boat neat.
The fenders were hung off the life lines with care
With hope that ducks would stay out of there.

The crew were nestled all snug in their beds
While visions of trophies danced in their heads.
And the captain in her harness and first mate in his cap
Had just settled in for a strategy recap

The moon on the crest of the waves down below
Give the sparkle of mid-day to objects to show,
When, what to my wondering eyes should appear,
But the Davy Leach, with the fleets in its sphere

With the little boat driver, (navigating just so)
I knew in a moment it must be the PRO
More rapid than power boats his fleets how they came
He whistled and shouted and called them by name

Now Arrows, now Rainbows, now Solings and J’s
On Stars, on Cruisers – swift be on your way
To the top of the course and then on to a reach
Now windward, now leeward, take care not to breach

Out to the ‘J’ mark, the fleets follow in line
They look to the committee boat and wait for a sign
The buoys are dropped, the line is set
The countdown begins – have they started yet?

Then in a twinkling the orange flag is flying
The Leach is on station, get ready for trying
A horn, then another - five minutes then one
We’re ready to go, the countdown is done

Competition is fierce and tactics are all
The finish in sight, keep your eye on the ball
Over three days, five races are run,
There are winners and losers, but all had much fun

The Races are over, the game is complete
It’s time to head homeward, so come join the fleet
Up comes the anchor, the shore is in sight
Doug’s work is now over, the Leech is done for the night

As he springs to his helm, to his crew he does whistle
And away they all fly like the down of a thistle
But I heard Doug exclaim ere he drives out of sight
Happy racing to all, there’s a party tonight!