HOME | REGISTER | SAILING CLASSES | ABOUT US

Thank you all for a wonderful summer!

By every measure, summer 2019 was an absolute success. From the record number of sailors to the perfect weather, the past twelve weeks highlighted the best Sheridan Shore had to offer. Our engaged coaches invented new games and courses to demonstrate techniques and racing strategies. We saw the campers grow from newcomers without their sea legs to talented and confident sailors.

Off the water, campers eagerly participated in themed weeks such as shark week, pirate week, and chivalry week where they won prizes in various activities like shark-themed art shows, pirate dress-up, and compliment competitions.

These three months could not have been possible without the hard work put in by our staff, sailors, and of course…. the parents. If your sailor is ready for another summer of fun, stay tuned to The Mainsail for summer 2020 registration next spring. 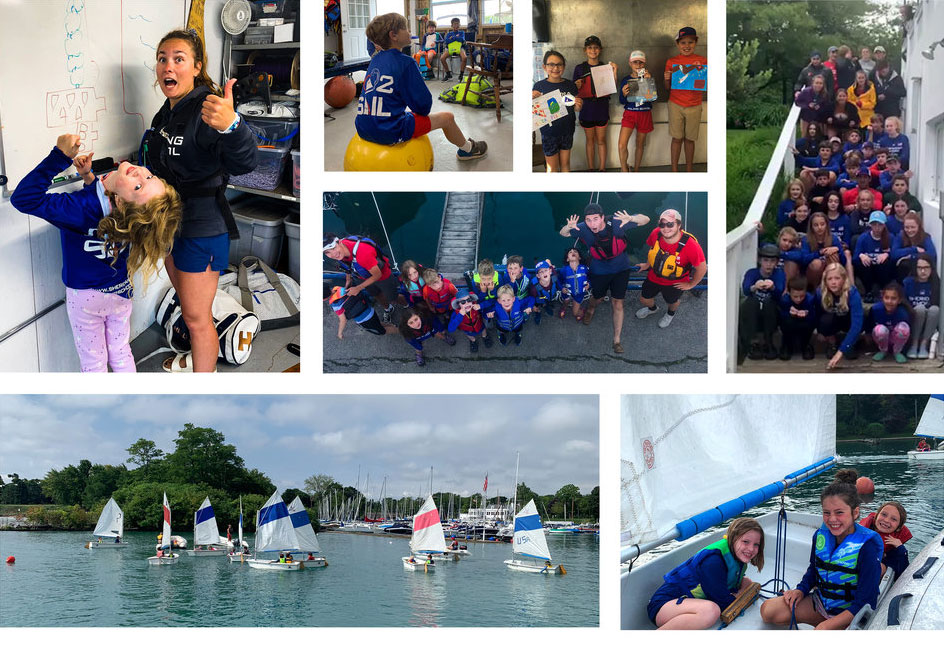 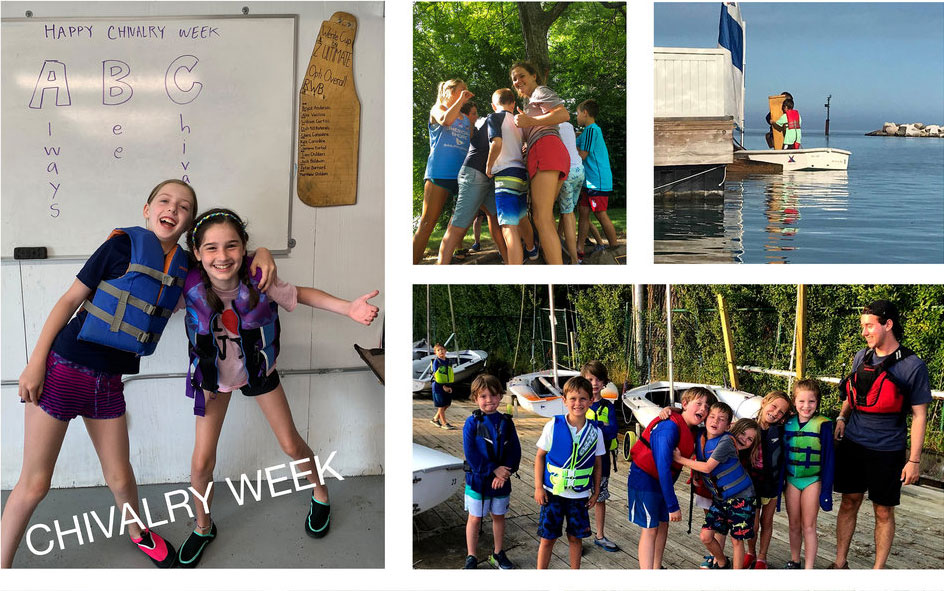 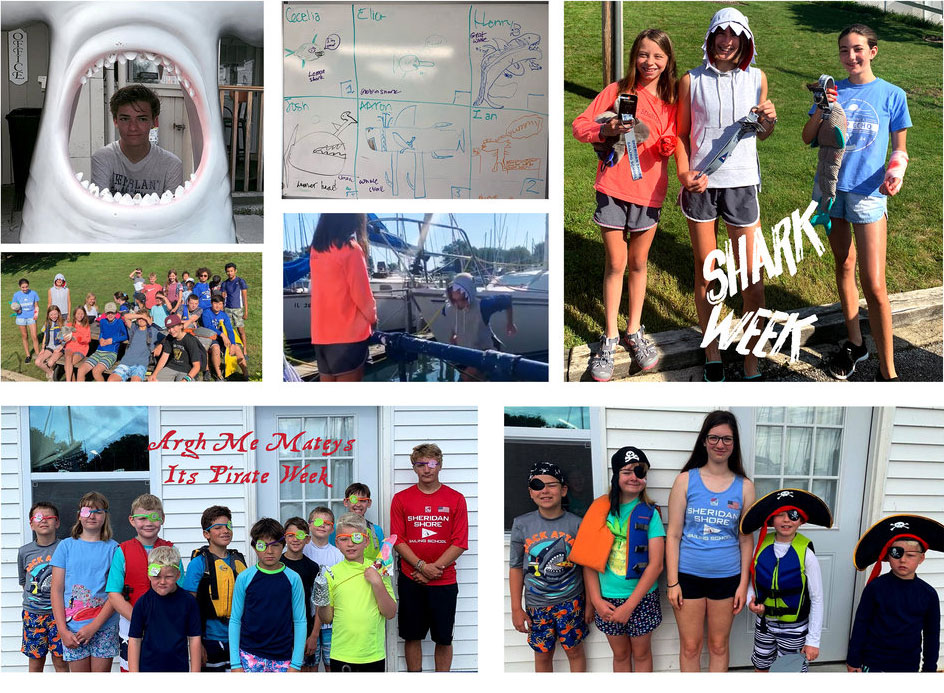 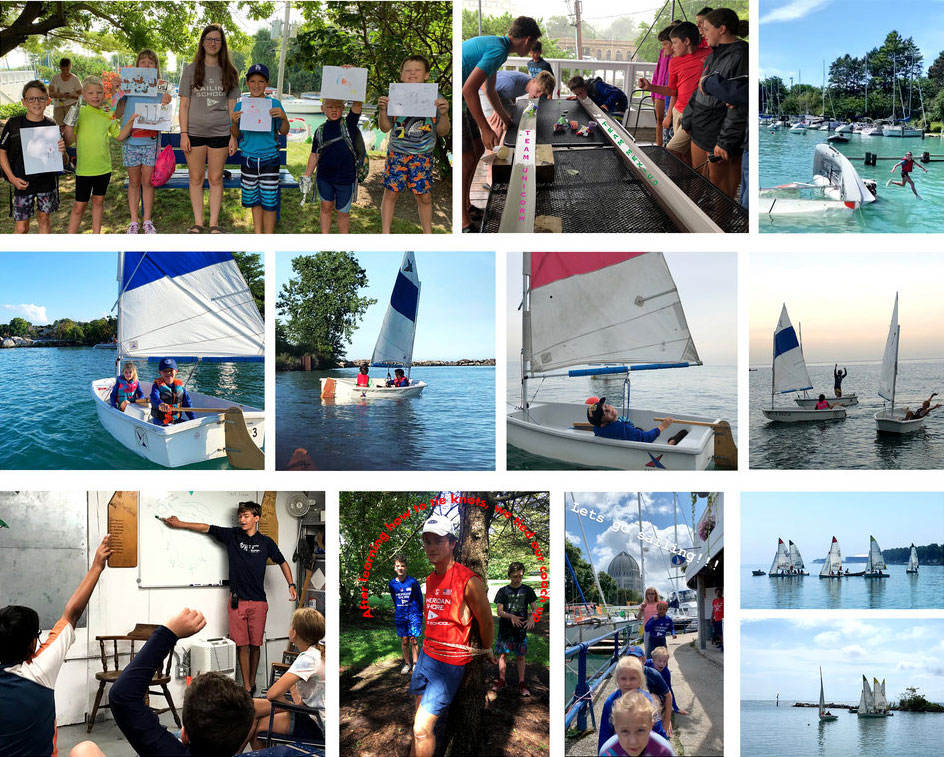 The Sheridan Shore BBQ was a blast. Our wonderful staff entertained sailors and their families by offering boat rides on our J24 and J70 and served up a delectable grilled fare.

On the patio, children showed their parents the prams and Optis they sailed during the summer and also showed them a thing or two about nautical knots. As the evening was winding down, the winners of our raffle were drawn, and four lucky winners walked away with prizes including private sailing lessons courtesy of Sheridan Shore Sailing School, Sea Safari, and two sailing cruises on boats moored at the WHC and Burnham Park. 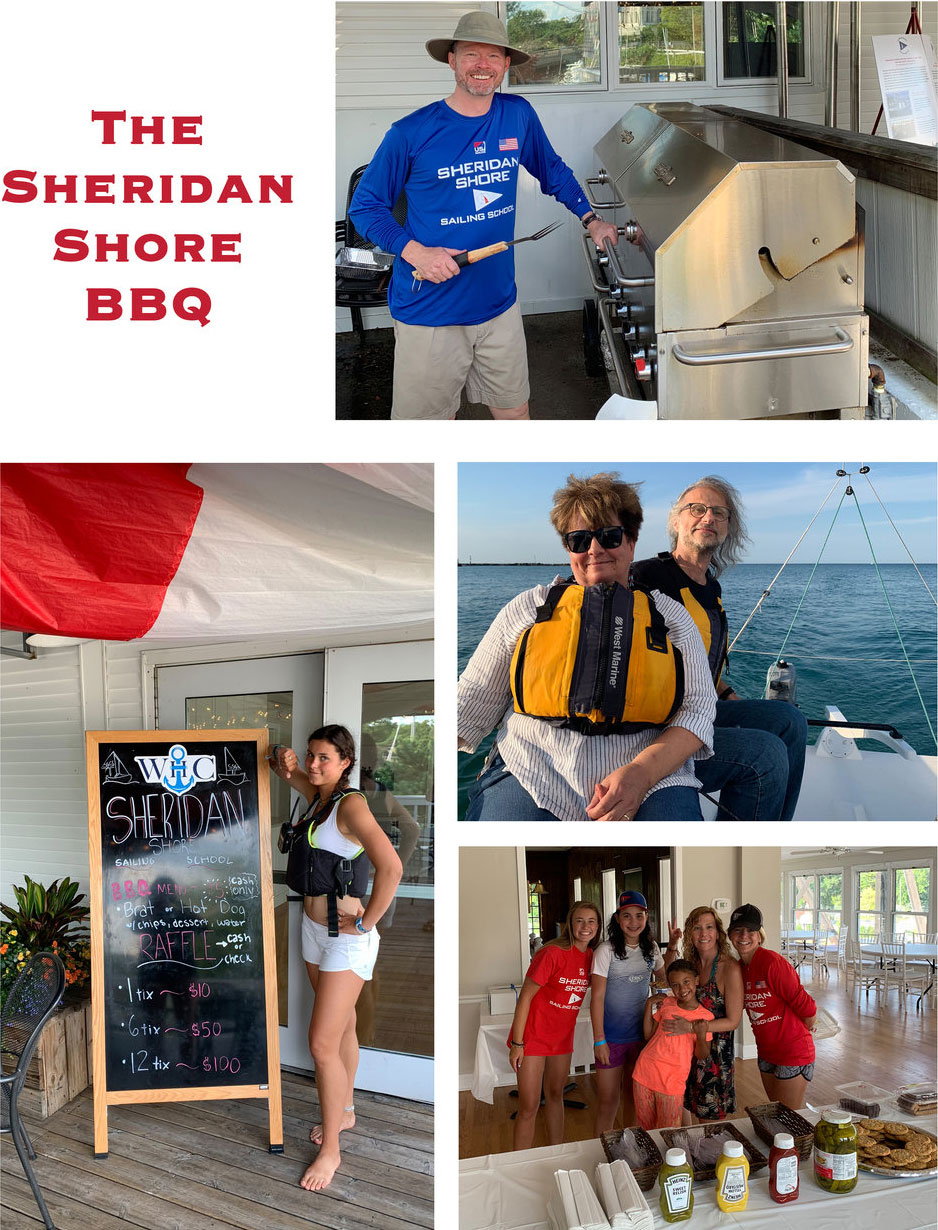 We were pleased this July to host three different community summer camps for some sailing classes at Sheridan Shore Sailing School. The three summer camps came from Reach Out Community Center in South Lawndale, Tamarak Day Camp in Lincolnshire, and the Park District of Oak Park.

Reach Out Community Center is an organization that seeks to give underprivileged youth access to new and exciting opportunities. During July the kids had a blast cruising on our J70, J24, as well as our fleet of 420s. 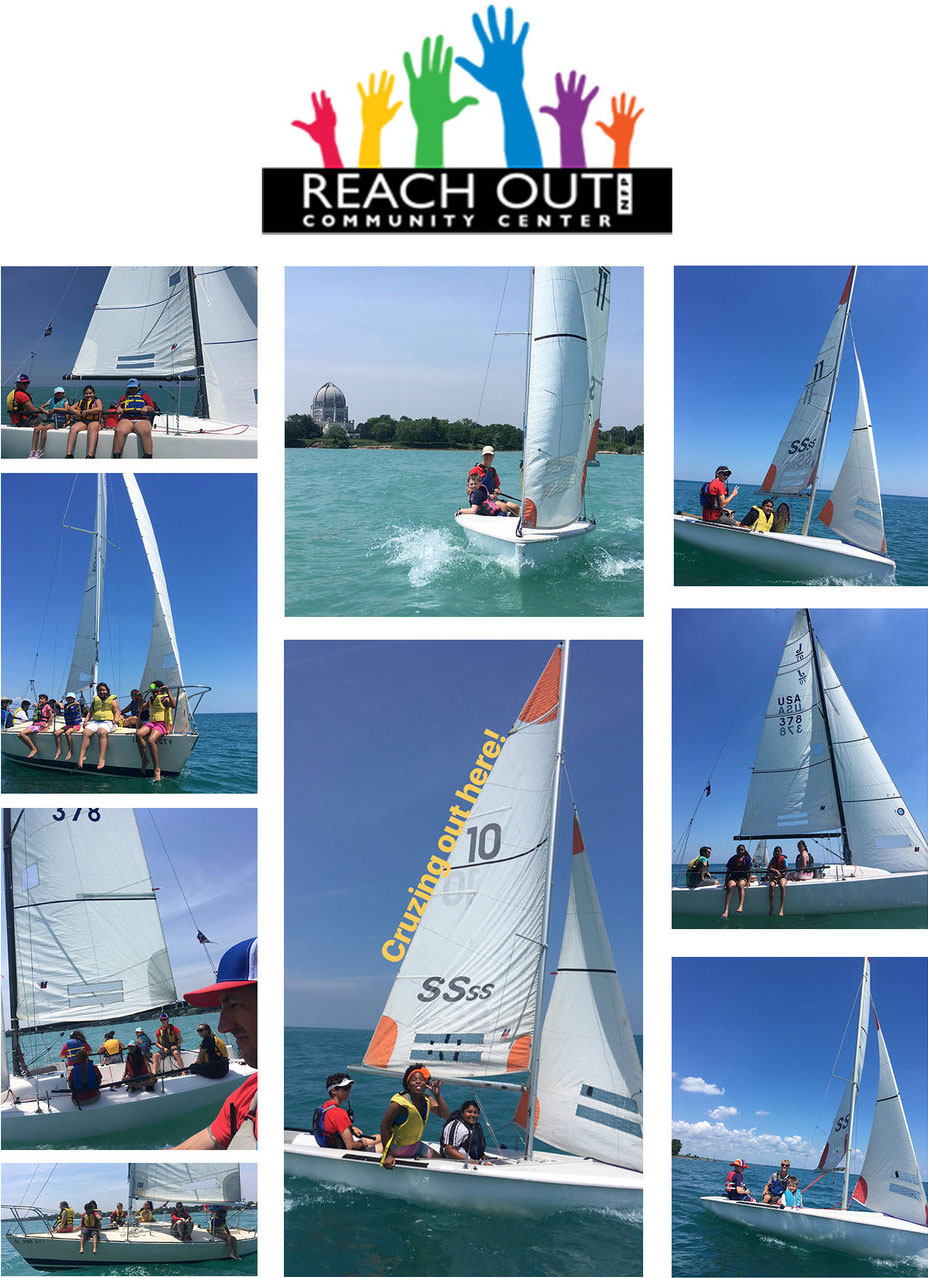 Over two weeks in July, thirty-five campers learned the basics of sailing from knot-tying to cruising Lake Michigan on our 420s, J24, and J70. Our coaches set up fun games such as paper boat races and sailing jeopardy on a single stormy day. During the nice days, the campers were engaged with games of sponge tag and mini-regattas. 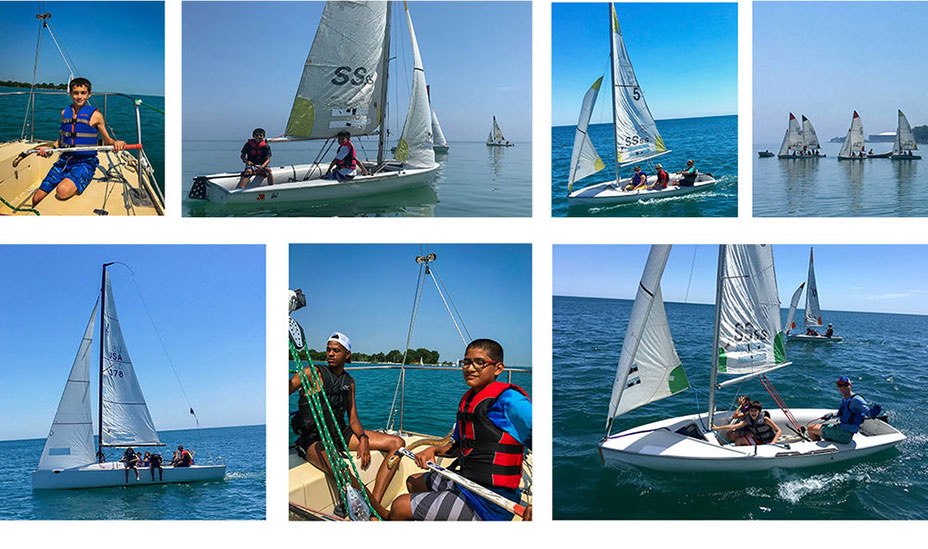 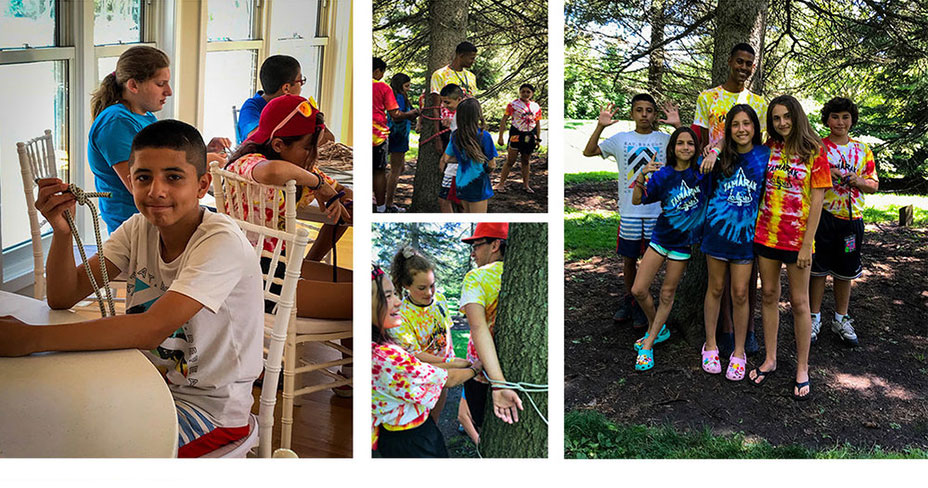 For two days in late July, campers and counselors came aboard our J70 and J24 sailboats for cruises around the pristine Lake Michigan coastline before winding down the day with a series of fun sailing-related games and competitions. 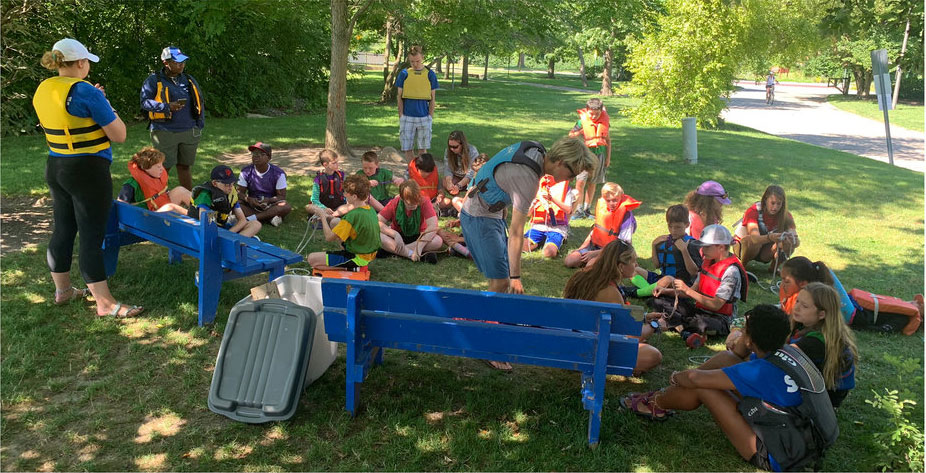 This year's Alumni Regatta had a great turnout, with 14 boats on the line. Sailors battled light and variable conditions throughout the day and got 3 races in. The regatta ended with an alumni picnic and fun game of volleyball. Congrats to Chris Lynch and Nik Peterson for taking 1st place. 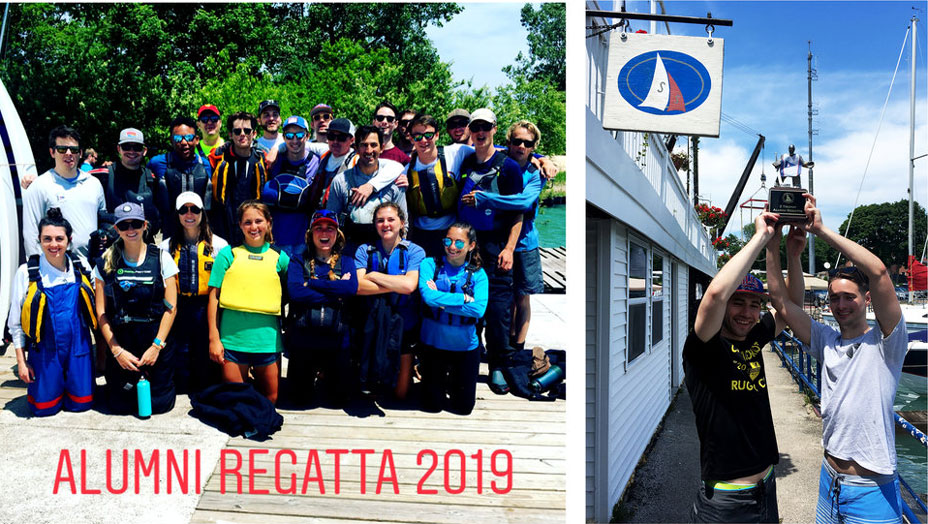 The first regatta for our summer race teams was Wente Cup. We had a great turnout for the Wente Cup this year. Sailors braved light and variable winds and we got in 5 quality races for the 420s & Lasers, and 3 races in for the Opti Red, White, Blue, & Green fleets. Thanks to all the sailors & coaches for another successful Wente Cup! 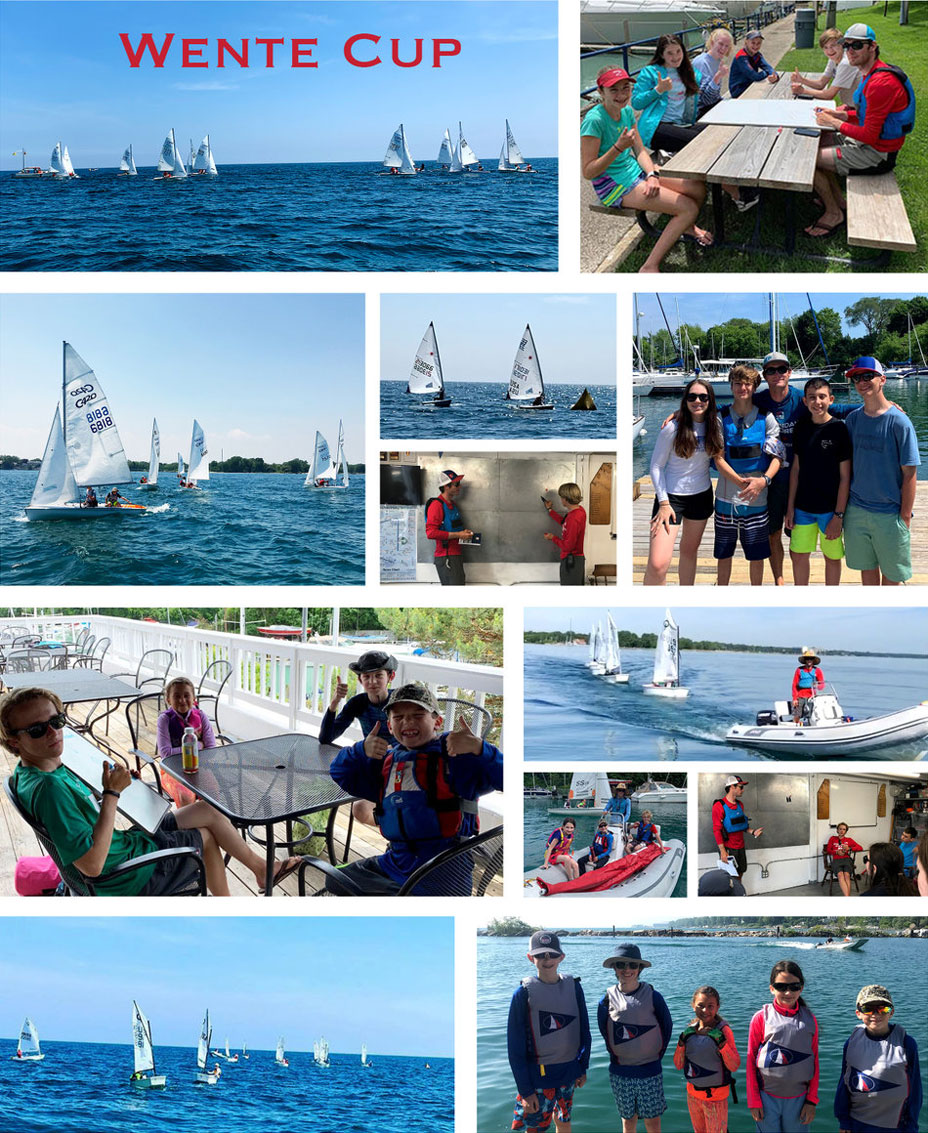 The Opti Race Team sailors Alex Scott and Luke Montzka traveled up to Milwaukee to take part in the Kaszube Cup 8-10 JUL. They sailed against twenty other Optis belonging to five other programs from around the Midwest.

On Day 1, a strong sea breeze built and the race committee opted not to send the green fleet out in the afternoon. Green fleet sailor Luke Montzka went out anyway and practiced in the strong winds and chop. On Day 2, both Alex and Luke performed admirably in the moderate conditions, and Alex got his first top 5 finish in the Red/White/Blue fleet. 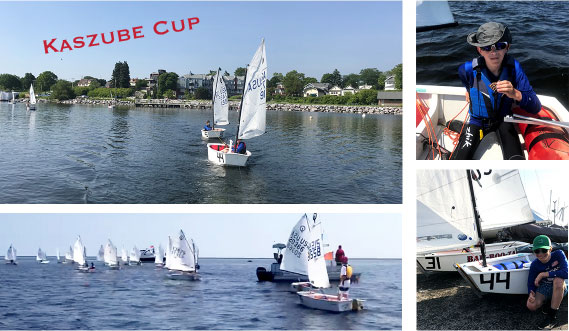 The Sheridan Shore 420 Race Team went to Area K in Milwaukee Wisconsin. Area K is the qualifying event for the Bemis Smith National Championship put on by US Sailing. The first day of racing was in light and variable conditions. Day two started under postponement, as the wind was over thirty knots. On the third day, the wind subsided and allowed for an incredible afternoon of racing.

The North Shore regatta had a light breeze, but we still got some good races in. In the end, our 420 race team of Jack Bezaitis and Julia Bogdanowicz placed 5th and Maggie McShane got 3rd in Opti Green Fleet. Thanks to Lake Forest Sailing for a great regatta! 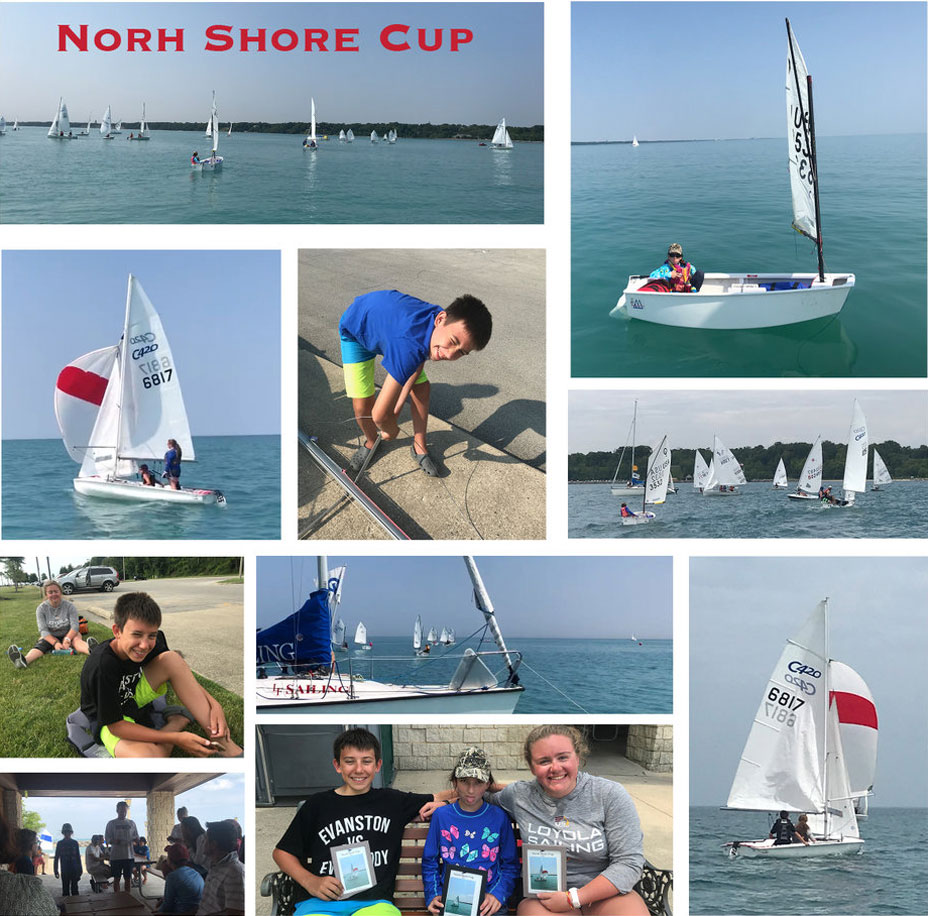 Sheridan Shore sent one 420 team (Jack Bezaitis and Hannah Tracey) and one Opti (Luke) to the 2nd annual Andrea T Regatta at Racine Yacht Club. The Andrea T is a one-day event and was fun for all, and Jack and Hannah got 2nd in the 420 division while Luke got 4th in Opti Green Fleet. 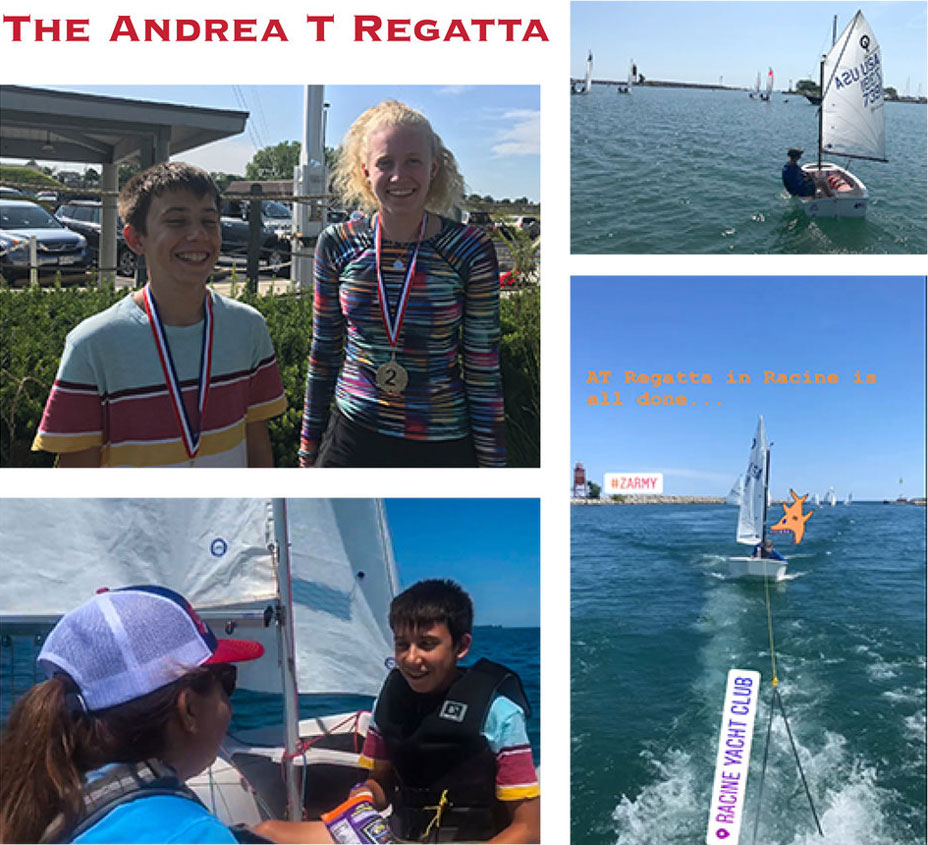 The 420 race team sent two sailors out to the East Coast to compete in The Hyannis Regatta and Buzzards Bay C420 Championship. Hyannis Regatta was sailed out of Hyannis, MA. Buzzards Bay was sailed out of New Bedford, MA. Both of these regattas were incredible training opportunities for the sailors. Getting out of the Midwest and having the opportunity to sail in two different hundred and fifty plus boat fleets was exciting for our sailors. Sailing on the ocean brought about its own unique set of challenges. This was a great opportunity to represent Sheridan Shore Sailing School at a national level. We are looking forward to this trip next year! 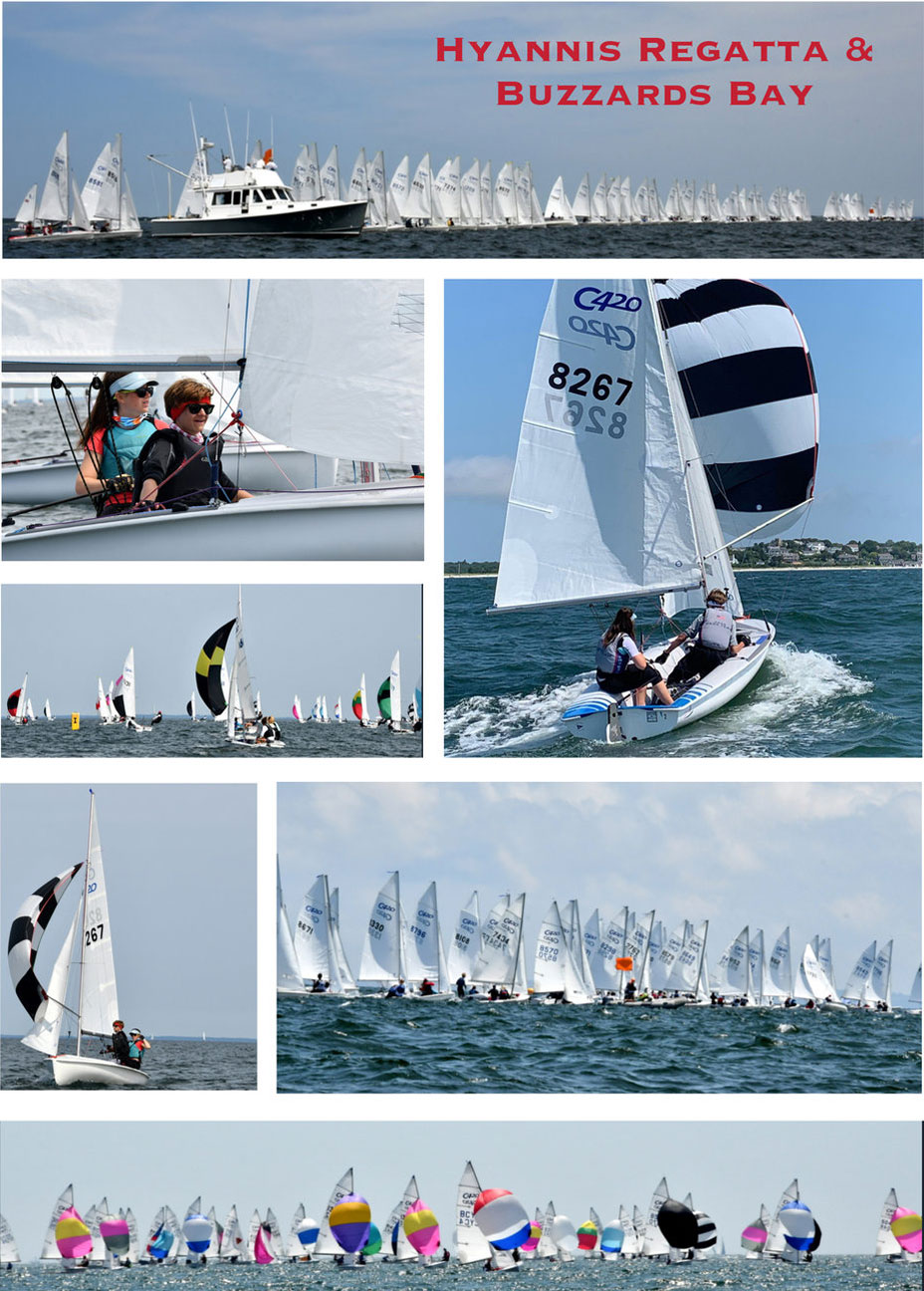 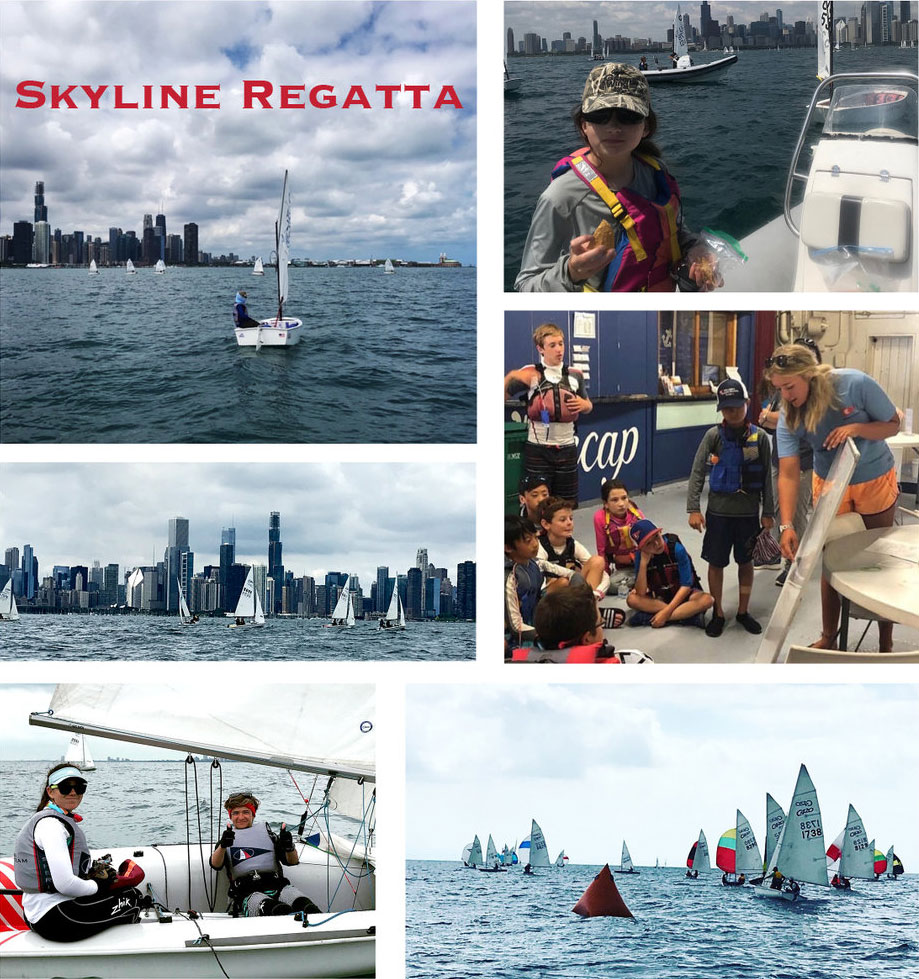 Sheridan Shore Sailing School provides our sailors with leadership training, high-performance coaching, and respect for our natural environment on which we compete. Instilling our sailors with safe practice in and around water is our highest priority. This year one of our fundraising goals in a new safety boat. With a new boat, we will be able to increase our sailor capacity at practice and offer our sailors with the continued level of excellence associated with the Sheridan Shore Sailing School name. Another fundraising goal focuses on replacing our existing trailer in order to transport four boats as well as the coach boat in order to compete in regional, national, and international regattas.

Sheridan Shore Sailing School is a 501 (c)(3) not-for-profit organization. ALL donations are tax-deductible.

Monumental Events are Occurring at the Sailing School

The most exciting news is the Sheridan Shore Sailing School Floating dock construction. Wilmette Harbor Club and Sheridan Shore Sailing School have partnered to construct a floating dock in the harbor for the sailing schools’ fleet of 420. Our old dock was limiting the time we could spend on the water at practice since the single ramp was a constraint in the process. With the new floating dock, we will be able to simultaneously launch all boats and spend more time on the water for practice. 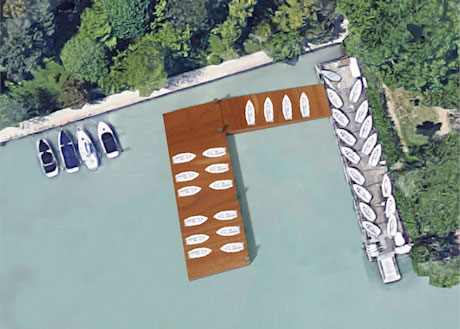 A Note From The Sheridan Shore Sailing School Board

Hello to all! Thank you to all who were able to make the SSSS BBQ. It was fun to have parents meet the staff and other campers. We want to thank you for supporting the sailing school. Hopefully, you met new friends and had fun cruising on the J24 & J70.